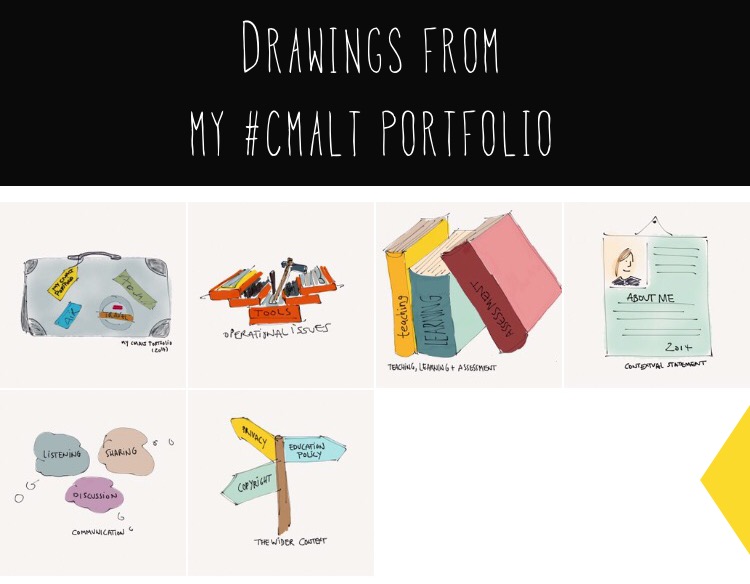 Creating a #cpd #cmalt portfolio as a solo undertaking

At a recent session with a group of Learning Technology professionals we discussed how to best compile a portfolio for CPD and accreditation such as for the CMALT scheme. One of the options we discussed was to join forces either as a group within an institution or with peers elsewhere. In many instances that involves meeting up for writing sessions, progressing through the process at the same pace and sharing work in progress. There are a lot of advantages to this, but what if you don’t have that option? I wrote my own portfolio pretty much in isolation until it was very close to completion (full disclosure: it did take me three attempts over a 5 year period to actually complete it, so my approach is not necessarily the one to follow. On the other hand, I’ve learnt from the mistakes I made). So this post contains a brief overview of how to compile a CMALT portfolio as a solo undertaking.

Step 1: I started with the structure, copying the heading structure that’s required into a blank Google doc. At the start is the contextual statement, the future plans section is last and in between are all the required Core Areas as well as a placeholder for the Specialist Area.

Step 2: I then looked at the structure and tried to write down 1-2 examples of work I had done in each section. I added no details at this stage, just enough information for me to be able to identify what I meant. It was very quickly apparent that I had a lot of examples in some sections, none in others. So I moved some around which could fit into other sections. Once I had covered all Core Areas it was easier to decide what to pick for my specialist option, basically something I hadn’t already covered.

Step 3: Once I had the structure and at least 1 example in each area, I started with the section I thought would be easiest (1b in my case) and added a description and some evidence. Once I had those, I added the reflection at the end. That’s what I did for each section in turn. Some took longer, usually because evidence was time consuming to collect or reflection felt harder. Because I already had a scaffold (i.e. the heading structure and at least 1 example for each section), working on the portfolio moved ahead at a much better pace. In previous attempts I hadn’t planned ahead and found the blank pages ahead daunting each time I moved on to a new section.

Step 4: Once all the required and the specialist areas were complete, I took a step back and started writing my contextual statement and the future plans section. That was a lot easier with the rest of the portfolio in place because the examples I used shaped what I wrote. Also, having reflected on my work made thinking about the future much more straight forward.

Optional step 5: Because I wrote my portfolio in isolation, without peers or feedback or someone to compare it with, I felt some feedback would be useful before I submitted it. I sent it to a few people and they came back with useful comments which were incorporated. I also shared it with colleagues who were directly mentioned.

Hearing about the sharing and support that groups or peers provide sounds like a great way to undertake CPD. In my case, writing my portfolio was mainly confined to odd anti-social hours and I needed to progress at my own pace. If, like me, you are on your CPD or #CMALT journey in a solo capacity, I hope this post is helpful and good luck!